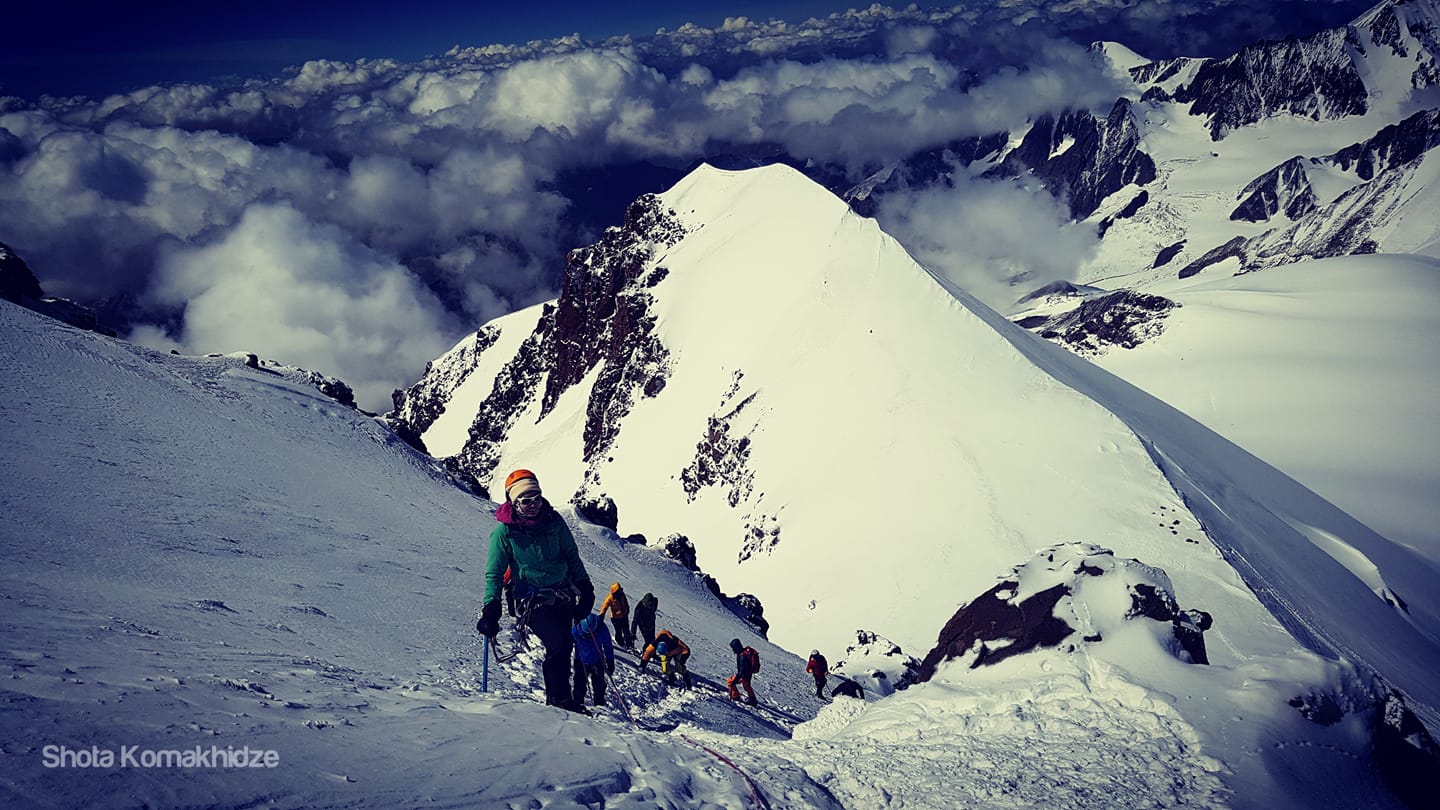 Ski touring and other winter activities in Georgia

What additional  services you can get on Mt Kazbek

What equipment and dress we need to climb Mt. Kazbek

Getting ready for the expedition to Mt. Kazbek


Preparation for the peak involves: one day for acclimatization, training on the ice or snow, how to move with the help of a rope, moving down the steep hillside with the help of crampons, how to stop, using an ice-axe if you slip down.

Day one – Acclimatization and Preparation for climbing mount Kazbek

Acclimatization is usually the day before climbing and for that we move to 2400m. Spending one night in the base camp is also acclimatization. So, it's advisable to spend one night at base camp.

After spending a night at base camp we have breakfast. At about 10-11 o'clock we go in the direction of the church, which is near the Meteostation. For the acclimatization we don’t need an ice-axe, protecting belt, etc. We take only water and a warm jacket. We go up to about 4200m height, where we stop for 30 minutes. It’s possible to take pictures of very beautiful views. Going up and coming down takes about 2 hours. After coming back to camp we rest for 10-15 minutes and start training on a snowy hillside, where we check our equipment and how to adjust (fit) them for the peak day. The training takes about one hour. After training we have dinner and after dinner we have a short briefing about the peak and have a break.

As climbing up and climbing down takes about 12-16 hours, we start moving at 2-3 a.m. The summer temperature then is quite low and when ascending higher, it gets lower and it is even lower in windy weather, to -20°C. In other months of the year the temperature is much lower. In winter it may go down to -40°C or -45°C. So, on the day of ascending the peak we take warm jackets, warm gloves, a face mask etc. 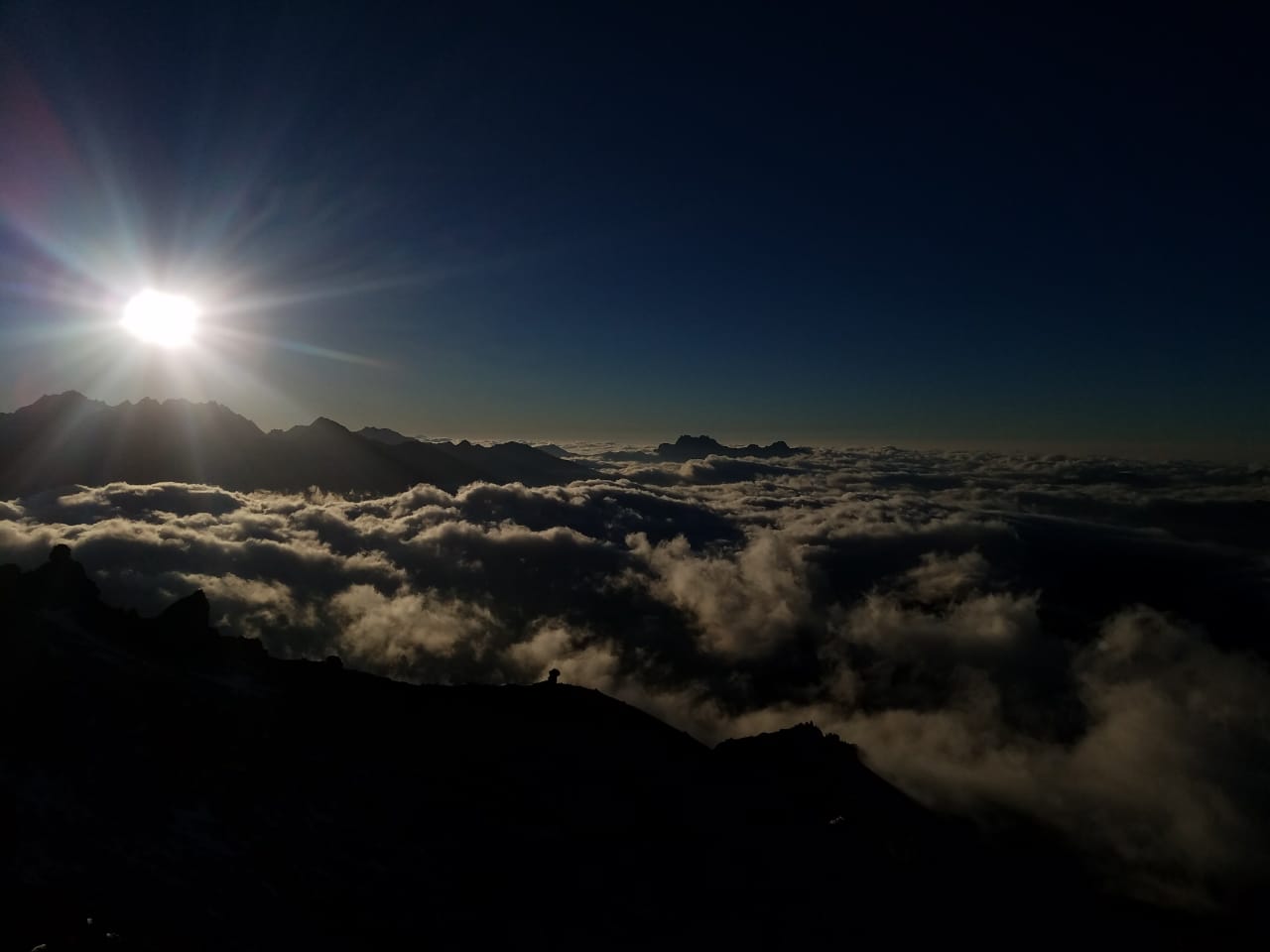 In addition to temperature, ascending is difficult because of the difficult relief of the route. Crevices are are numerous and in most cases covered with snow. From base camp it is necessary to move with rope and with the help of a guide. During fog or mist people have lost their way, which can be fatal. So it will be better if you plan your ascent with a professional guide.

We leave at 2-3 o'clock, after breakfast. For the first 4 hours we walk in the dark so you will need good torches. After 1.5 hours we pass dangerous crevices and from there up to the peak and back we will need to be tied together with rope. From there we also need to adjust our crampons. Though in case of snow crampons are only needed from the plateau at 4300m. Four hours after leaving camp we go up to the plateau of the peak at 4300m. After having a little rest we go up the hillside which passes the north-west side of the peak and goes to the saddle at 4900m. To pass this part it takes about 3 hours. The slope isn't very steep so we move using ice-axe or walking sticks. 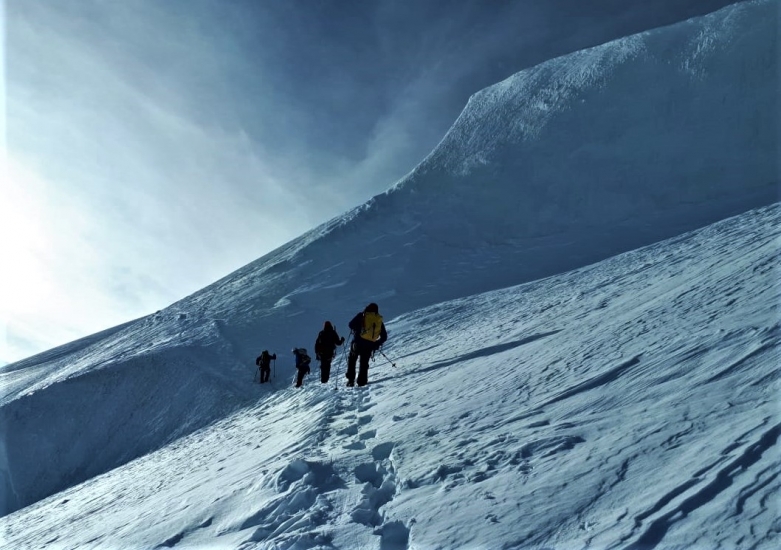 The saddle is a wide, flat place from where we go on to the peak tied with rope. The slope is inclined about 35-40 degrees. We must be very careful not to slip when we move on this slope. From the saddle to the peak will take about 40 minutes. After staying on the peak we start moving down very carefully. The descend takes about 4-6 hours. We have to take into account that the last part of the track is often covered with ice, so we can't move together and we move by fixed ropes which are prepared by the guides. On fixed ropes people move in turn, one by one.

When descending we must be careful as at that time snow gets soft, especially in summer when the weather is warm and the crevices which were covered with snow may be dangerous when ascending. Sometimes the clients unfasten the ropes or take off their helmet, so we ask you to follow the instructions given by the guide.

After 4-6 hours we return to the base camp where we rest, have hot dinner and tea and also a glass of wine to celebrate our success. 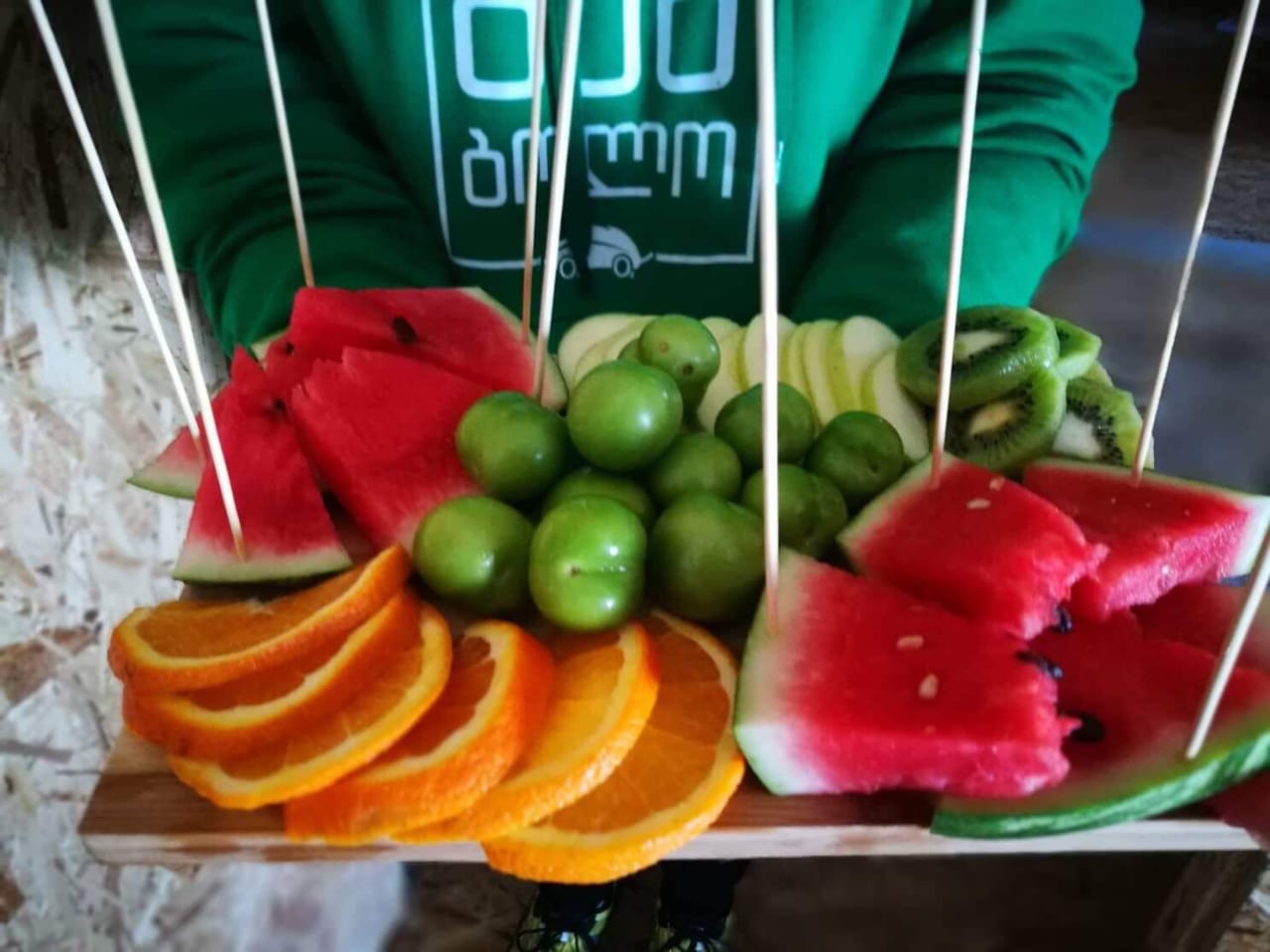